(MENAFN- The Conversation) Few Lebanese will be surprised that the latest leak of offshore financial documents alleges Lebanese figures, including the current Prime Minister, have used offshore tax havens (although Najib Mikati, a businessman who held the top post in July, denied). The fact that the so-called Pandora Papers rank Lebanon among the world’s most offshore companies – 346 – highlights the industrial scale of corruption in the state.

Lebanon is already ranked among the most corrupt states internationally. Opinion polls show that 91% of Lebanese citizens believe corruption is widespread in the public sector.

Pandora’s leaks about the extent of money laundering and the use of offshore havens are a bad time for the Lebanese political establishment. The country is currently going through an unprecedented economic and political crisis.

Lebanon’s economic collapse is ranked by the World Bank among the three most severe on record since the mid-19th century. According to the UN, the crisis has left more than three quarters of the population below the poverty line and hyperinflation has massively devalued wages and savings.

Read more: Lebanon: a year after the explosion in Beirut, a failing state fights against poverty and sectarianism

The fact that Mikati is accused in the Pandora Papers of using offshore companies seems to contradict his image as a reformist statesman ready to confront the problem of state corruption.

Mikati is seen by the West and its institutions as an acceptable leader capable of carrying out economic and structural reforms believed to be essential to create stability in Lebanon.

Corruption in Lebanon has involved billions of dollars. It featured senior political leaders and their cronies using government ministries and offices as individual fiefdoms to enrich their personal fortunes.

The political elites who run powerful ministries grant lucrative contracts to private companies owned by themselves, their families or their allies, who are required to give huge bribes in return. A study published by Chatham House in June 2021 found a lack of transparency in the awarding of contracts for major infrastructure works dating back decades.

The sharing of power aims to give guarantees of representation to the various Lebanese sects within the government and the public sector. The main result of Lebanese power sharing, however, is what is known as the “muhasasa” (attribution) state. Attribution state means that major political and public functions are vested in cult leaders in a system that is more of pie-sharing than true power-sharing.

The sectarian fragmentation of ministries and posts – the spoils of peace – allowed these personalities and their associates to amass obscene fortunes for themselves and their close allies. Grand corruption covers almost all sectors: transport, health care, energy, natural resources, construction and social assistance programs.

The extent of grand corruption further hinders the development of democratic institutions and statebuilding. This assertion is evident in the way political leaders use corruption to build patron-client relationships with their communities. By essentially controlling many key services through public and private networks, political leaders make many Lebanese citizens dependent on them for their daily survival.

When seeking health care, food and other basic services, Lebanese citizens often have to turn to their communal leaders rather than the state. The political leaders who deliver these services expect their communities to return the favor by supporting them at the polls. Corruption is therefore at the heart of the survival of sectarian policies.

The capacity of the Lebanese state to effectively fight grand corruption is limited. While political leaders are quick to implement anti-corruption measures, the agencies overseeing the process are toothless. Political leaders deeply mired in corruption have no incentive to create policies that seriously tackle corruption. 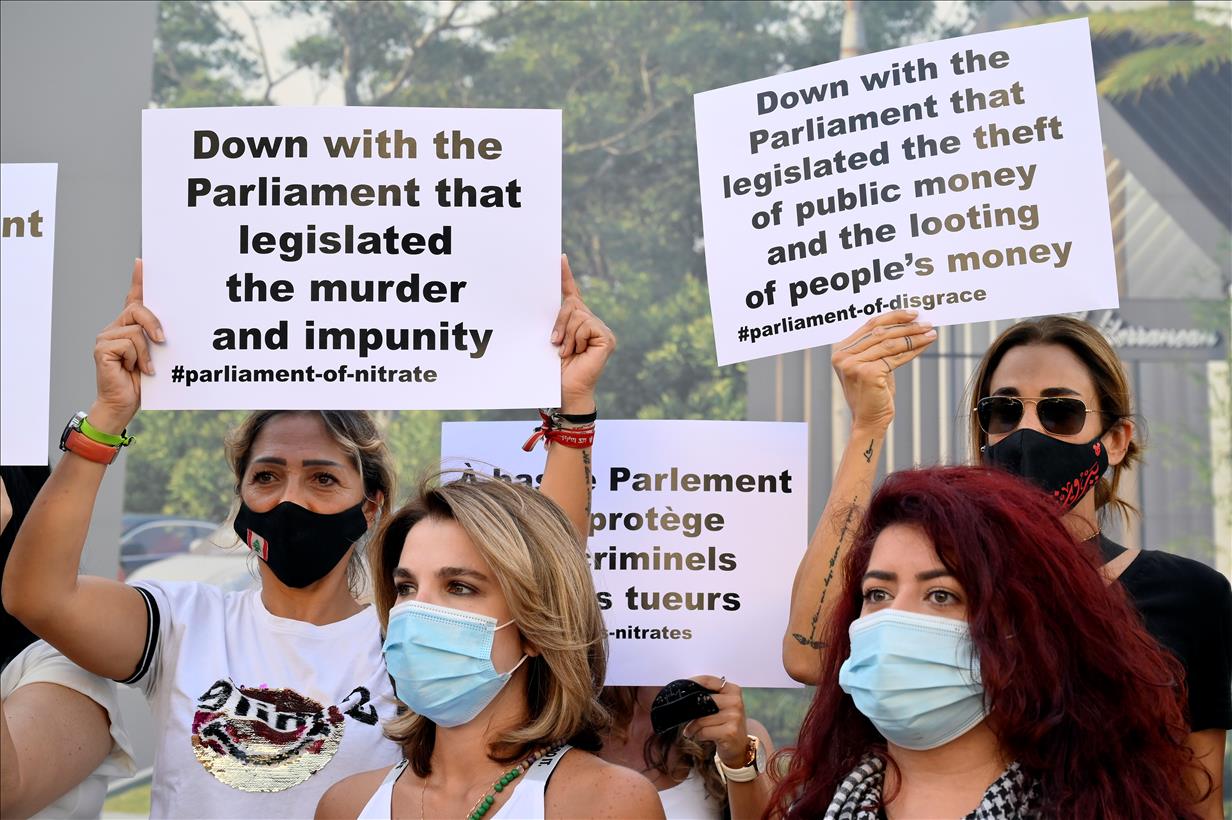 Public anger against the government and political and business elites has increased. EPA-EFE / Waël Hamzeh

In recent years, no high-ranking Lebanese politician or statesman has been indicted, let alone convicted of corruption. Only lower ranking public officials have been successfully prosecuted for corruption.

The Lebanese judicial system is not immune to the interference of political leaders who use all the powers at their disposal to slow down or close investigations into grand corruption or the processes aimed at condemning impunity. The Beirut firing port probe which recently encountered massive political obstruction is widely seen as an example.

What this means for ordinary citizens

The 2019 Lebanese Revolutionary Episode or Thawra sought to dismantle this sectarian pie-sharing apparatus in which sectarian warlords vie for fortune and power. Protesters took to the streets for months, calling on political leaders to step down. But other aggravating crises – ranging from the pandemic to the explosions in Beirut and economic collapse – have restricted people’s ability to organize and mobilize on the streets.

Lebanese political scientist Karim El-Mufti calls this the “zombie syndrome”, whereby people are plunged into exhaustion and despair. The landscape of the revolutionary uprising is increasingly fragmented and people are busy thinking about their livelihoods. With an economy in tatters, the dilemma for all is whether to stay or go.

Does this mean that the Lebanese do not have an agency? With the next parliamentary elections slated for March 2022, various informal platforms and citizen parties hope to build on the momentum to turn the tide. The Pandora Papers are further proof that change is more urgent than ever.

Legal warning: MENAFN provides the information “as is” without warranty of any kind. We do not accept any responsibility for the accuracy, content, images, videos, licenses, completeness, legality or reliability of the information contained in this article. If you have any complaints or copyright issues related to this item, please contact the supplier above.

Next Soldiers, prisoners and displaced people vote ahead of Iraq elections