The relationship once shared between the late Syrian and Iraqi leaders, Hafez al-Assad and Saddam Hussein, can be described as both complicated and intertwined. So was the story between Damascus and Baghdad.

Many factors, such as politics, bigotry, ideology, and geography, have defined the hallmarks of Iraq-Syria ties and the race for leadership in the region.

The roots of the competition for regional domination can be traced back to the reciprocal destiny of the two countries. The Baathists came to power in Damascus in March 1963 but ended up losing Baghdad at the end of the same year.

However, after successfully shifting governance in Syria to a new direction in 1966, the Baath Party returned to the forefront of authority in Iraq a few years later. In 1970, Assad ended all struggles facing the movement with his corrective revolution.

There have been several attempts to reconcile the two Baathist regimes in Iraq and Syria.

Iraq took part in the October 1973 war and the oil embargo. But the relationship would soon start to fall apart again. At the time, Saddam “hovered” under the wing of former Iraqi President Aá¸¥mad á¸¤asan Bakr, while Assad consolidated his position and influence in Damascus and Lebanon in 1976.

The breakthroughs in the Egyptian-Israeli negotiations and the signs of a â€œrevolutionâ€ in Iran meant that Syria and Iraq would rest on a â€œbed of thornsâ€. This led Presidents Bakr and Assad to sign the Charter of Joint National Action in 1978, which resulted in plans and treaties that would lead to the unification of Iraq and Syria in early 1979, two weeks before a “revolution” is announced in Tehran. .

As Assad managed to get his brother back on track, Saddam succeeded in overthrowing Bakr and coming to power in July 1979. On his way to becoming Baghdad’s new ruler, Saddam ordered the execution of the “enthusiasts” of the unification and accused the then Syrian vice president of “conspiracy.”

After the signing of the Camp David accords, Assad sought to strengthen the “southern front” against Israel. This effort was mirrored by a similar effort by Baghdad to fortify Iraq’s eastern gates against Iran.

Shortly after the start of the Iraq-Iran war after the “revolution” in Tehran, Assad sided with Saddam’s enemy, and the Damascus-Baghdad trail plunged into another deep valley. Baghdad responded by severing relations with Damascus in October 1980 and supporting the â€œMuslim Brotherhoodâ€ in Syria.

Concerned about its agenda in Lebanon, Syria closed its borders with Iraq in 1982, thus cutting off the Iraqi pipeline to the Mediterranean. Iran then replaced the lost Iraqi oil with its own.

In the mid-1980s, towards the end of the Iran-Iraq war, King Hussein of Jordan brought Assad and Saddam together for a â€œstormy marathonâ€.

After Iraq invaded Kuwait in 1990, Assad decided to join the international coalition to liberate the Gulf country. As the Syrian president bolstered his internal economic status and influence in Lebanon, his Iraqi counterpart, Saddam, drowned in a quagmire of isolation and sanctions.

In the mid-1990s, the Baathist “comrades” would again try to take the pulse of bilateral relations.

Assad was motivated to seek alliances that would shield him from the uncertainty of peace negotiations with Israel and help resolve an economic crisis in his country. At the same time, Saddam was looking for all means to break the siege of Iraq.

Turkish pressure, the aftermath of Hussein Kamel, Saddam’s son-in-law, fleeing to Amman under his father-in-law’s regime change banner, and the Jordanian discourse on “federalism” would also bring Assad and Saddam closer together.

The two kingpins have spoken of choosing two of their most trusted companions to lead a secret communication channel.

Saddam chose his former chief of office and ambassador in Doha, Anwar Sabri Abdul Razzaq al-Qaisi, and Assad affected Khaddam, who had served him well during his struggle with his Baathist comrades in the 1960s.

Qaisi and Khaddam were well aware of the need for absolute confidentiality in their task.

When we compare Khaddam’s files, which he took to Paris in 2005 and to which Asharq Al-Awsat had access, and an exclusive interview with Qaisi, a difference of opinion emerges on who started the channel.

Khaddam says Saddam broke the ice in August 1995, but Assad responded to this initiative with “doubts” in light of their common history and Saddam’s role in defeating the Charter of Common National Action by 1979.

Rising above his doubts, Assad decided to engage in dialogue and test Saddam before turning the page, according to Khaddam.

But Qaisi says Assad first launched the initiative after publicly declaring Jordan’s ambitions for federalism a threat to Syria and Iraq. According to the former ambassador, after Assad’s statement, he received a signal from Khaddam to open a channel between the two presidents.

In his letters to Assad, Saddam seemed in a hurry to reopen the two embassies closed in 1982 and to hold political meetings and open the borders.

In early 1996, Assad responded to Saddam’s request with patience and caution not to drive a wedge between Damascus and the Arab countries. He informed his Iraqi counterpart that he intended to “maintain contacts with a number of Arab countries so as not to further complicate the Arab situation”.

Qaisi told Asharq Al-Awsat that he had visited Damascus secretly on six occasions, including four on trips from Sudan.

“Saddam seriously wanted to open a new page with Assad to restore relations,” he told the newspaper, adding that he had been given the green light to show that Iraq was ready for a far-reaching reconciliation.

The opening of the channel, according to Qaisi, was to “convince the brothers in Syria not to receive Kamel”.

â€œIndeed, it was not received due to common concern over Jordan’s ambitions to propose federalism,â€ Qaisi noted, adding that Saddam had offered to hold a secret summit with Assad on the border, to form a “common political direction” and to hold bilateral discussions. on the relaunch of the Charter of Common National Action, as well as on the idea of â€‹â€‹an Arab summit in Damascus for Iraqi-Arab reconciliation.

â€œKing Hussein’s recent statements, ahead of his visit to Washington, confirm that he is accelerating the push for the United States to strike a military deal and form a regional alliance with Israel and Turkey at its backbone; it is certainly directed against Iraq and Syria, â€Saddam wrote to Assad in March 1996.

As a corollary, the director of the Iraqi intelligence service Mani Rashid revealed that secret Iraqi-Syrian security meetings had been organized to ensure coordination “against Jordan and Turkey placing the two countries in the clutches of a pincer”.

According to Qaisi, Saddam has welcomed Assad’s stingy criticism of the establishment of federalism in the region “with an open heart”.

In the exchanges of letters and the reports of top-secret meetings, the speech between Saddam and Assad underwent a significant change, as Khaddam conveyed the latter’s greetings to â€œAbu Uday (father of Uday: Saddam) – in Arabic, to refer to someone by their authorship is considered a sign of respect and kindness.

For his part, Saddam would qualify Assad as a â€œbrother presidentâ€. The exchange of letters has been dominated by what the two can do and what they want to do.

In addition to speaking to Saddam, Assad continued to contact Arab nations and inform French President Jacques Chirac that “the situation in Iraq is worrying and has become a time bomb about to explode.”

Behind closed doors, Chirac surprised Assad by opening yet another case: the Syrian presence in Lebanon. The French president has made an offer regarding the disarmament of Hezbollah against Israel’s withdrawal from the Golan Heights, but Syria should guarantee its military presence in Lebanon.

In the second half of 1996, Assad’s main objective became to prevent the collapse of the regime in Iraq and to reopen the borders with his fellow Levantine. This followed his initial attempt to overthrow Saddam.

Even though Assad was uncomfortable with Saddam delegating Aziz to redevelop relations with Syria, he welcomed him to Damascus in November 1997. Assad also received Iraqi Foreign Minister Muhammad Saeed Al-Sahaf in February 1998 .

At the time, Assad’s belief was that Saddam was not working to remove â€œjustificationsâ€ for a military strike during a crisis with international inspectors. He therefore agreed with Egyptian President Hosni Mubarak to let Saddam know that a strike was underway and that it would target both his regime and his country.

Again, there was overlap in regional issues. After Chirac’s offer to â€œtradeâ€ between Iraq and Lebanon, US President Bill Clinton tied Iraq to the resumption of the Syrian-Israeli peace negotiations.

On February 21, 1998, Clinton wrote to Assad that if Saddam is forced to take up arms, it is essential that Syria remain impartial and that Iraq comply with UN resolutions. He also noted that he was not willing to go back to basics after all that had been accomplished in previous negotiations.

Assad responded on March 13 of that year, speaking of the “anxieties and tensions that are building around the possibility of military action against Iraq.”

He stressed the willingness to resume negotiations (with Israel) where they left off, following the loss of Shimon Peres and the victory of Benjamin Netanyahu in 1996.

Subsequently, the Iraqi-Syrian borders were reopened and reconciliation offices were set up in both capitals. The “transition” took place in Damascus and the “regime was overthrown in Baghdad”.

As the US attack on Iraq began to emerge in 2003, Assad flew to Tehran. He met with Supreme Leader Ali Khamenei to agree to â€œresistâ€ the Americans in Iraq, which was seen as a buffer zone between Syria and Iran.

The contents of the letters exchanged between Saddam and Assad were unknown. However, revealing them, while also being recognized by Qaisi, aims to highlight parts of the shared history between Syria and Iraq and how it has affected the region.

Next Riots in Lebanon over economy injure 10 soldiers, protesters 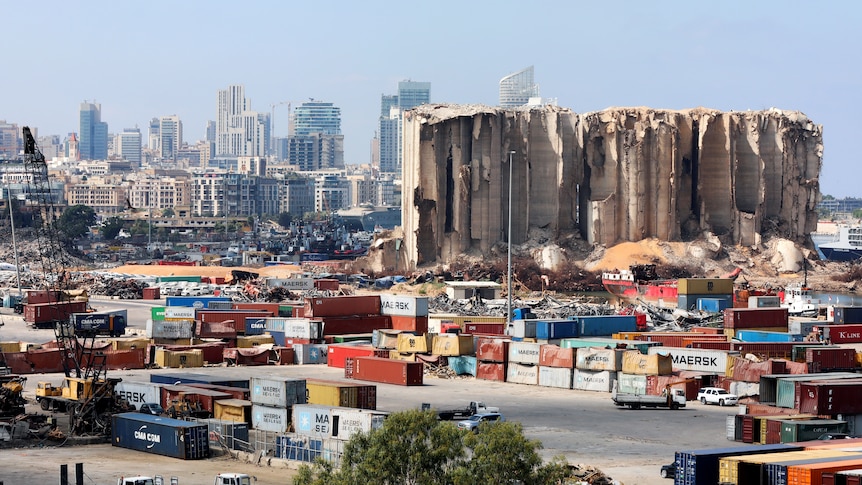